The applications surrounding successfully developing self-driving cars and other vehicles are reshaping not only the auto industry, but mobility worldwide. As a U.S. Department of Transportation designated AV Proving Grounds, Wisconsin is at the forefront of these transformative technologies, and the R&D we do contributes to revolutionizing how the world uses transportation. Scroll down or explore additional resources to learn more.

The Wisconsin AV Proving Grounds partners are a natural choice for the AV R&D because of the range of environments and facilities available to accommodate the testing of a wide variety of different technologies and applications. These range from lab-based and simulated environments, the closed track at MGA Research in Burlington, Road America in Elkhart Lake, corporate campuses, the UW-Madison campus, and public roads.

We have received your RSVP. We look forward to seeing you at the forum.

We have sent an email to the specified email address. Please click the link in that email to complete the sign-up.

Sorry, but something has gone awry. Please try again later.

Avid attention on automated or autonomous vehicle (AV) technology is widespread and burgeoning, and the collaborative groundwork being laid in Wisconsin is a prime example. Wisconsin is leading the development of deeper understanding of this transformative technology and how it can be harnessed for the greater good of society. Researchers with the College of Engineering at the University of Wisconsin-Madison (UW-Madison) assess the benefits, technical aspects, and risks of AV, as well as collaborate on policy issues with government. AVs are rapidly pushing technical, safety, acceptability, legal, regulatory, and liability boundaries.

AVs have significant potential to improve safety and quality of life. More specifically, AV shared mobility can provide ladders of opportunity to all, including previously underserved communities. Furthermore, AVs can bring significant new research and development opportunities to UW-Madison and new businesses to the state of Wisconsin, including startups and tech companies. 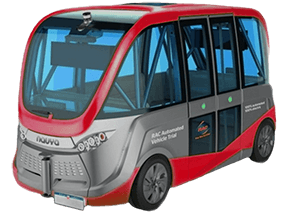 Cameras gather visual information from the road and traffic control and send them to the controller for processing.

The GPS unit identifies the precise position of the vehicle and aids in navigation.

About the Proving Grounds

The mission of the Wisconsin AV Proving Grounds (AVPG) is to provide a path to public road evaluation by contributing to the safe and rapid advancement of automated vehicle development and deployment, and providing a full suite of test environments, coupled with research, open data, and stakeholder communication. Our team’s philosophy holds paramount safety, followed by best practice tenets of security and open data. Without these fundamental elements, we recognize it makes little difference what our readiness is or what research and development objectives may be.

Create highly detailed and precise data that describes to the vehicle details about the roadway.

Determine the certification processes for bringing autonomous vehicles to market and onto public roads.

Determine the most effective ways to retrofit older vehicles to operate with autonomous vehicle technology.

Study the interactions between humans and AV technology to optimize interfaces and remove obstacles to adoption.

Work to eliminate roadblocks between public perception and the future of autonomous vehicle technology.

Data and sensing including LIDAR, GPS, cameras, communications, and other sensors. This parallels the Safety Assessment point on Object and Event Detection and Response.

Vehicle operations including speed, acceleration and deceleration, performance on grades and curves, and in the case of electric vehicles, range and charging time.

Human-machine interfaces such as sensors, communications, and responses. For this item, our team has the opportunity to leverage the full-scale driving simulator at UW-Madison’s College of Engineering.

Inclement weather operations including snow, ice, fog, and high winds. One of the larger unknowns for AVs is winter operation.

The team includes the second largest city in Wisconsin, the region’s largest private employer, a premier private proving grounds in operation for decades, one of the nation’s most reputable race tracks, public agencies, and Wisconsin’s flagship research university. Researchers with the UW-Madison College of Engineering will manage and oversee all aspects of the AV proving grounds work, as well as provide research, development, and data stewardship. A key partner on this team is the automotive proving grounds facility owned and operated by MGA Research Corporation near Burlington, WI. The City of Madison and other agencies are partners for AV policy development, regulation, and operations on their roads.

Additionally, we work with corporate campuses to test automated vehicles in workplace environments, accounting for such factors as safety, usability, and acceptance.

Forum on the Impact of Vehicle Technologies and Automation on Users

News from the Proving Grounds

The Bill is Signed; What’s Next?

On Monday, November 15, Biden signed the $1.2 Trillion Infrastructure Investment and Jobs Act (IIJA), delivering a historic investment in rebuilding U.S. infrastructure.  And here is the kicker: the Senate aims to pass the $1.8 Trillion Build Back Better Act, a social and climate bill, before Christmas.

So how does the federal government divvy up and spend trillions of dollars?

Well, that work is now beginning, particularly for the folks at the U.S. Department of Transportation.  Whether you are a transportation official, a consultant, or a weekend transportation policy wonk (they exist), here are a few things to consider.

Everybody is asking the same question: how is this bill going to affect me, my community, and my state?

The White House has already been releasing fact sheets with state-by-state summaries of funding.  Here is an example that was last updated in April.  They will be updating these sheets in the coming days and weeks.

The American Society of Civil Engineers (ASCE) also has a helpful breakdown here, but it too needs to be reworked.

If you are itching for these breakdowns, but don’t necessarily have the research staff on hand, just give it time.  The White House, and frankly every journalist and think tank in the field, are in the trenches creating these updated state-by-state fact sheets.

Next, it’s important to revisit the four main ways the U.S. DOT funds investments in transportation and infrastructure.

There are discretionary grant programs, like the popular Rebuilding American Infrastructure with Sustainability and Equity (RAISE) grants. Each program office solicits applications and selects projects based on program eligibility, evaluation criteria, and departmental or program priorities.  The USDOT just awarded Alabama two RAISE grants, which total $18,453,139, for instance.  There is a lot more where that came from.

There are also formula grant programs that allocate funding to recipients based on formulas set by congress, like the Annual Federal-Aid Highway Funding Programs appropriated to states.  According to Jeff Davis, a senior fellow at the Eno Center for Transportation, now that POTUS has signed the infrastructure bill into law, states should be receiving their 30 percent highway formula funding increase via formal apportionment from Federal Highway Administration within 2-3 weeks — over $13.5 billion more than last year. 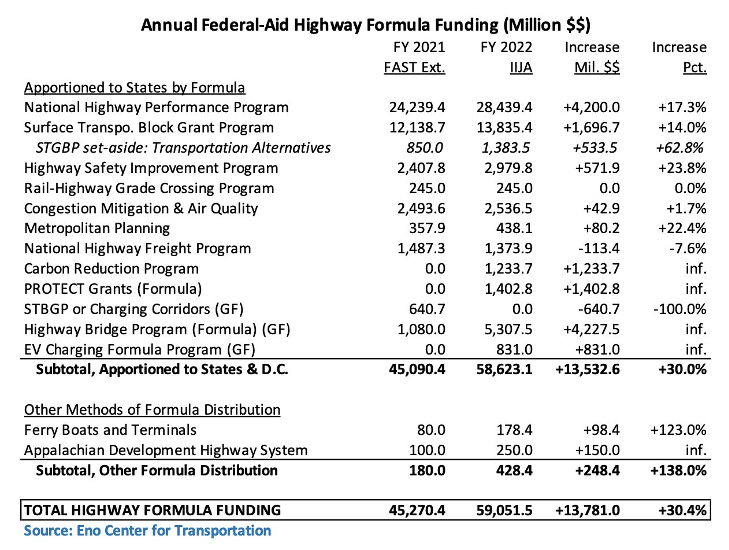 And finally, there are a host of loan financing programs and Public-Private Partnerships (P3s).  Loan financing programs are credit assistance programs that leverage federal funds to attract private and other non-federal investments in transportation. P3s involve collaboration between one or more government agencies and private sector companies to leverage public and private resources to develop and execute a project.  Both of these programs get a boost from IIJA.

The largest investment in roads, bridges and highways made by the federal government since the creation of the U.S. interstate highway system is going to require a larger federal workforce to make it happen.

According to Freight Waves, the DOT will grow more than 50% to help stand up new programs included in the bill.

“We will go from being … around a $90 billion-a-year agency to one that will be closer to $140 billion,” Deputy Secretary Polly Trottenberg said at a media briefing.

“Not all of that money will be needed to run the department, but obviously we’re an agency that’s going to grow. We will need new members of the team, and we’re in the process of moving forward in some of those new hiring needs.”

So if you are looking for work, re-polish that resume.

With all this money in the pipe, states are scrambling to update their plans and priorities.

Take Colorado for example.  Colorado is due to receive well over $5 billion from the bill over the next five years for highways, bridges, public transportation, expansion of broadband internet service, water infrastructure improvements, airport projects, and more.

Surface transportation is where the state likely will see the greatest impact — with the federal money supercharging an 11-year, $5.4 billion state transportation bill passed by the legislature earlier this year.

So in the coming months, state transportation leaders will decide how to apply the highway money to CDOT’s 10-year priority plan, which is being updated.  Remember, they wrote this plan before they knew they would be getting all this cash.  So naturally, the plan is going to change.  Projects that were deemed too expensive or low priority can move up on the list, for instance.

Updating these documents isn’t just a good mental exercise.  It is also a requirement.  Here is a link that explains the process. 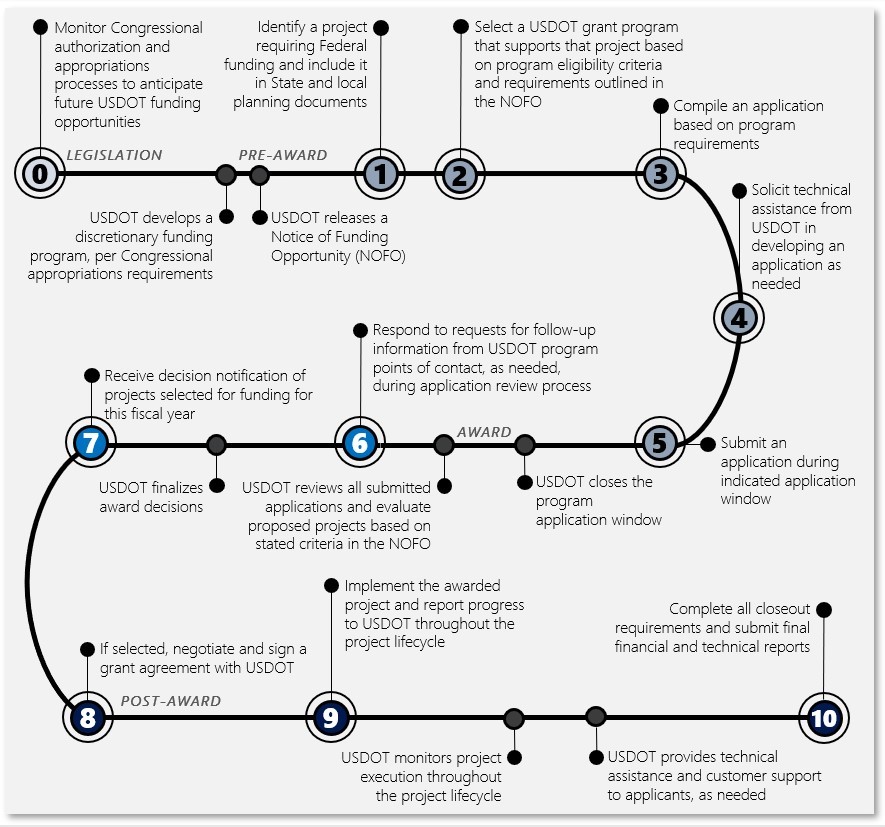 Transportation Secretary Pete Buttigieg will control $126 billion in new spending over the next five years, according to a Reuters tally — more than one-fifth of the new spending authorized by the law.

“We’ve never had a (transportation) secretary who’s had that much authority before,” said Jeff Davis, an analyst at the Eno Center for Transportation, a Washington-based think tank.

“What you’re going to see … is an emphasis on projects that, taken together, give us extra value in the priorities of this administration,” he said.

So, you can expect to see Buttigieg running victory laps on national television to bolster democrats and the Biden administration.  IIJA is no doubt good policy.  But at the end of the day, it’s also good politics.  And there are elections around the corner.

Robert Fischer is a WiACES board member, President of GTiMA, a Technology and Policy Advisor to Mandli Communications, and an Associate Editor of the SAE International Journal of Connected and Autonomous Vehicles.

The Future of Transportation is Here in Racine, WI

The City of Racine, as part of Smart Racine efforts, is pioneering the introduction and integrati…

Biden’s Job Plan: For This Fight You Want an EV with a TV

If you are an EV owner, or would like to be,…

You’re in Charge of the U.S. DOT; Where Do You Start?

The impossibly improbable has occurred and you’re the new transportation secretary.

One for more of the form fields is incomplete or invalid. Please correct the errors before submitting the form.

Your message has been sent. We will get back to you shortly.