Here are just a sample of public domain resources and documents related to the many and complex legal and liability questions surrounding automated vehicles. No legal opinion is provided nor implied, and the contents of the resources are those of the relevant contributors. As always, it is helpful to keep in mind the levels of driving automation, as laws and regulations often vary with those. 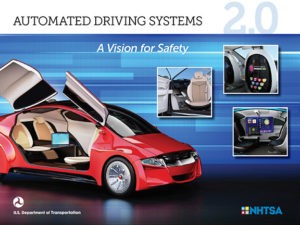 The USDOT/NHTSA Federal AV Policy, September 2017, supersedes the initial version from one year prior. The guidelines remain voluntary, the policy applies only to SAE Level 3+, it contains guidance for state regulators, and the (optional) safety elements were reduced from 15 to 12 (click to see a list of those).

The September 2016 NHTSA Policy is included here for reference but has been superseded by the above 2017 version.